Every Monday I got to an athletics club called Kendal AAC. We always begin each session by warming up. We play games such as sharks in the water. Sharks in the water is where you have two sharks in the middle and fishes at the side. The aim of the game is that the fishes have to get to the other side without getting tagged by a shark. If you get tug you become seaweed. After the warm up we go around the different events and we have coaches who help us at each event. My coaches always tell me to repeat until I know I've got it right, then they check if I have.

We do different events every week, such as long jump, standing jump, hurdles, balancing and sometimes forward rolls. On Sunday 5th March I had a practice competition with the Year Five children as my athletics team has more Year Fives than Year Sixes and Sevens. Then on Sunday 12th March I went to the North West Indoor Athletics Championships in Manchester. My events were balancing, standing jump, 6 lap race and 4 lap race. I represented Cumbria and we were competing against Greater Manchester, Lancashire and Cheshire. My best event was the standing jump. I finished in 2nd place!

Every Monday I go to a trampolining club. The trampolines we use aren’t like your ordinary garden trampolines, they are Olympic style trampolines. They are very bouncy and are surrounded by crash mats.

First I warm up by doing tucks, straddles and pikes. This is where you do a tuck jump then a straddle jump and then a pike jump all with bounces in-between. Next I practice my routine for my upcoming competition. My routine goes like this. Half turn, straddle jump, swivel hips, (This is where you do a seat drop or bottom bounce and rotate half way round do another seat drop or bottom bounce, rotate half way round in the air to a stand.) pike jump, drop, tuck and full turn. You aren’t allowed a bounce in-between each move.

After I have gone through the routine, my instructor helps me improve and work on some of the harder moves. Then we work on somersaults.

Finally as a treat we play games. We play the seat drop game where the aim is to bounce the other person high into the air. We also play cat and mouse where you crawl around the edge of the trampoline. When you are bouncing you must stay on the cross in the middle. Also it is one person on the trampoline at one time. There are three people in my group and we take it in turns. 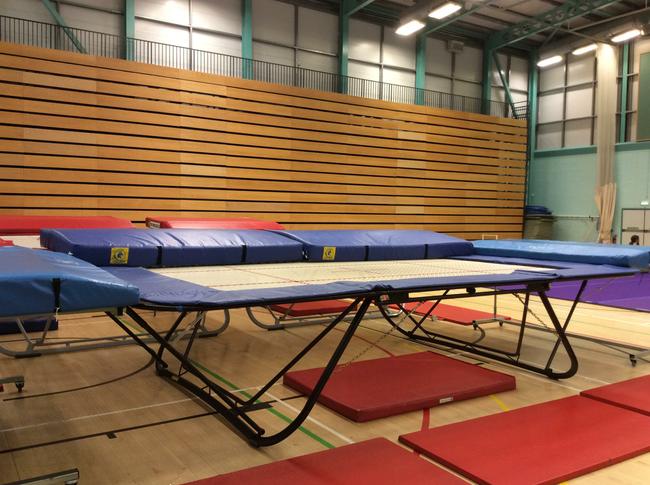 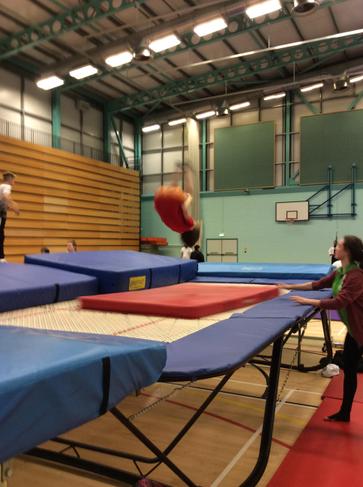